Above: View of Maui from the Safari Explorer - Photo by Hideaway Report editor
.article-cta-top

Travel through the Hawaiian islands has long been a favorite assignment. This time, instead of hopping from resort to resort, we opted to experience the archipelago aboard Un-Cruise’s 36-passenger Safari Explorer. Our seven-night journey from the Big Island to Molokai, with stops at Maui and Lanai in between, proved memorable in every way. Un-Cruise, formerly American Safari Cruises, runs small-ship expedition itineraries in Mexico’s Sea of Cortez, the Pacific Northwest and, most famously, Alaska’s Inside Passage. Like the Alaska cruise we enjoyed a few years ago, the Hawaii trip includes ports of call inaccessible to larger vessels — notably Molokai, which is forbidden to all other cruise ships — and affords wildlife sightings difficult to experience on your own.

Over breakfast one morning, a humpback whale and her calf breached three times, not 50 yards from my plate of eggs Benedict.

The whale-watching was superb. Over breakfast one morning, a humpback whale and her calf breached three times, not 50 yards from my plate of eggs Benedict. We spent an afternoon cruising the Humpback Whale National Marine Sanctuary. After a hydrophone had been lowered into the water, we listened to live whale song as we observed spouts, pectoral fin-splashing and breaching. Another morning, a dozen of us dutifully boarded one of the Explorer’s two skiffs for a sunrise whale-watching excursion. As I sipped my coffee in the twilight, longing to return to our cabin’s comfortable bed, a crew member spotted a whale “logging,” or resting on the surface. We approached and discovered a humpback nursing her newborn calf. The mother sometimes helped the calf onto her back, raising it above the waterline in order to catch an easy breath. We watched for 45 minutes, as mother and calf bonded — an extraordinary and unforgettable sight. One evening, we donned wetsuits for a night snorkel with giant manta rays

The snorkeling proved equally memorable. The coral wasn’t especially colorful, but the rainbow of fish easily made up for the deficiency. We swam through schools of black triggerfish with glowstick-like turquoise stripes, and watched multi-hued parrotfish peck at corals sheltering lipstick-red sea urchins. Needle-shaped trumpetfish eyed us suspiciously, and fluorescent schools of yellow tang fluttered with the current along the reef, like so many aspen leaves in autumn. I spotted a green sea turtle and swam with it across the reef for 10 or 15 blissful minutes. One evening, we donned wetsuits for a night snorkel with giant manta rays, which can reach more than 12 feet across. We clung to a surfboard with a light attached to it, watching in amazement as the rays made graceful cartwheels in the water to feed on the plankton that our lights attracted. Even our transfers to and from snorkeling sites were eventful, with whale, dolphin and shark sightings. At one point, our Zodiac stopped so that we could watch a tiger shark repeatedly (and unsuccessfully) attempt to fit an inflated porcupine puffer fish into its jaws.

Guests on the Safari Explorer tend to focus on these wildlife experiences as the vessel has few of the trappings of a luxury cruise ship. The dress code is resolutely casual, though we did see some collared shirts at dinner from time to time. Public spaces feel cozy rather than glamorous, comprising a simply decorated dining area of communal tables (no tables for two), an adjacent lounge area with leather sofas and a cushy banquette, a well-stocked complimentary bar, a wine library/music room with leather armchairs and an upright piano, and an upper deck with loungers, a teak dining set and a seating group protected by a canopy. Occasionally, I even saw guests use the upper deck’s three fitness machines.

Cabins, too, had simple décor, with carpeted floors, tile baths and walls adorned with light wood wainscoting. A wall-mounted flat-screen television displayed the day’s schedule and a rotating series of Hawaii-related films, as well as movies from a large DVD library. Our cabin proved snug, with a built-in wardrobe, a wall-mounted desk and a suede armchair. The bath held a toilet and small shower stall. We used our accommodations mostly for sleeping. I strongly recommend reserving one of the two higher categories of cabins, either an Admiral, laid out like a junior suite, or a Commodore Suite. Both have more spacious baths with full tubs, additional storage and queen beds accessible from both sides. Note that cabins have no telephones — guests must go to either the lounge or bridge for assistance. And the ship has no Wi-Fi access. A cell phone signal reached the ship for most of the cruise, allowing us to keep in contact with home.

During cocktail hour, we nibbled on crudités and charcuterie, before sitting down to three-course meals based on local seafood and meats (vegetarian options also available).

Meals also tended to be simpler than on a traditional luxury cruise ship. Each meal had only one seating, and guests chose whichever places they liked at the communal tables. At 6:30 each morning, the kitchen set out an “early riser” spread of coffee, fresh fruit and pastries, which varied from strawberry and mango scones to cinnamon rolls with passion fruit cream cheese frosting. Some guests gathered for an hour of yoga on the top deck at 7 a.m., before joining everyone else for a hot breakfast. Specials alternated between sweet and savory, from coconut French toast with Portuguese sausage and bananas, to a mushroom and tomato frittata with a side of bacon. We enjoyed light one-course lunches such as rare sesame-crusted ahi tuna over a salad of spinach, blueberries and mango; and huli-huli chicken with pineapple fried rice.

During cocktail hour, we nibbled on crudités and charcuterie, before sitting down to three-course meals based on local seafood and meats (vegetarian options also available). At a typical dinner, we relished an appetizer of flavorful tuna poke on seaweed salad, followed by pork belly glazed with shoyu and yuzu, and sesame-crusted mahi mahi atop mashed purple potatoes infused with ginger. Desserts such as passion fruit cheesecake and pineapple upside-down cake with caramel sauce were difficult to resist.

All alcoholic beverages on the ship, excluding premium wines, are included in the price. Well-chosen wines served at dinner ranged from a Domaine des Malandes Chablis to a Two Mountain Syrah from Washington’s Yakima Valley. Beer drinkers also had an appealing selection from which to choose, including Maui Brewing Company’s Big Swell IPA on draft. And I always enjoyed returning to the boat after an excursion to find the cheerful bartender at the stern, welcoming us back with fruity, spritzy cocktails (rum or vodka optional). Like all crewmembers, she addressed guests by their first names, but nonetheless provided service that was thoroughly professional.

On our last full day, we landed on unspoiled Molokai, a 38-mile-long island with about 8,000 residents, most of whom fiercely oppose the island’s development. Molokai has just one proper hotel, and the Safari Explorer is the only cruise ship allowed to dock at the island. Gregarious local drivers took us along a winding road to the Halawa Valley, which sheltered some of Hawaii’s earliest human inhabitants. Archaeological remains date back more than 1,300 years, and up until tsunamis destroyed the valley’s infrastructure in 1946 and 1957, Halawa supported some 5,000 people who had been maintaining a traditional lifestyle.

They were chosen as children to learn all they could about traditional Hawaiian culture in order to pass it on to the next generation and to educate visitors.

There, we met Anakala Pilipo Solatorio, one of the few people left who remembers the 1946 tsunami, and his son, Greg Kawaimaka Solatorio. Both live as “Cultural Practitioners.” They were chosen as children to learn all they could about traditional Hawaiian culture in order to pass it on to the next generation and to educate visitors. We elected to hike with Greg to the Mo’oula waterfall. Although fragrant jungle now surrounds the trail, the path once served as a public way between taro fields and villages. Ancient ruins of volcanic rock dotted the entirety of the route, ranging from stones used for grinding medicinal herbs to sacred heiau (temples), one of which comprised multiple levels with an altar stone centerpiece. We marveled for a while at the narrow waterfall, plunging down a towering green cliff into a round pool. When we returned to Greg’s home and farm, we walked through his terraces of taro plants, irrigated by the ancient channels he had restored. In that place, at least, there was no need to imagine how the valley might once have looked. The old Halawa was there, spread out before us. 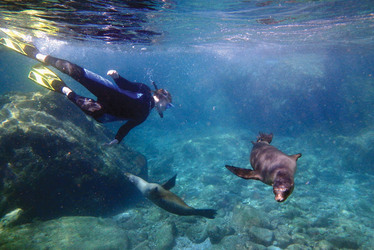 Un-Cruise’s Safari Explorer “Hawaiian Seascapes” is a seven-day trip offered from early November to early April. Admiral cabin, $10,990 for two; Commodore Suite, $13,390 for two. Rates include all meals and house alcoholic beverages, port taxes and fees, entrance fees to national parks, all activities organized by the ship and a 30-minute massage.

Read more about our editor’s trip to Hawaii