Our editors submit thousands of photos each year documenting their travel experiences around the world. We know our members have their own memorable trips too, so this year, we asked them to share their pictures with us. After receiving over 200 responses, we saw a little bit of everything, from family beach vacations in Hawaii to game drives in Africa. Here is the winner, along with the finalists.

About this photo: On our first game drive at Zarafa Camp, which was in the late afternoon, we came upon three lionesses going out to hunt. One of them was carrying a tiny cub, which she hid in the bush to protect it while she hunted. We spent almost four weeks in South Africa and Botswana, with a short stay at Victoria Falls. We especially liked Zarafa Camp, where the accommodations, staff and wildlife were simply spectacular. It was just magic!

Why we chose it: While we saw many wildlife photos in the photo contest submissions, and we see many daily, this image stood out due to its composition. While nearly anyone on a safari can get an image of animals, very few are so well composed. The soft focus on the flowers framing the lions was beautiful and made it a stand out.

About this photo: Many would say that the Quiraing, located in a remote area of northern Scotland, offers the best hiking trail in the country. The elegant Torridon Hotel, a couple of hours away, offers a wide range of nature and adventure activities. [The area] is remarkably civilized given that there are more sheep than people and it is 75 miles from the nearest cash machine. If you tell your waiter that you want porridge for breakfast, he will bring it with a shot of whisky.

About this photo: I took this from a rowboat while we were viewing the ghats along the banks of the Ganges River. We were on a wonderful three-week trip through India where we visited Bangalore, Varanasi, Agra, Ranthambore National Park, Udaipur and Jaipur.

Member for over 20 years

About this photo: My wife and I were on trip through Eastern Europe. We had spent several nights at the beautiful Augustine Hotel in Prague and drove to Schloss Dürnstein on the Danube in Austria. We were suggested a visit to Melk Abbey, a Benedictine abbey perched above the Danube 30 minutes away. The interior is a baroque masterpiece from the 18th century. Off the southwest corner of the church is the staircase shown in this photo. Holding my camera against the wall, I was able to take this photo from the base of the staircase. It is a magnificent spiral, rococo in style, that connects the library to the upper-level reading rooms. It must be one of the most beautiful spiral staircases in the world.

About this photo: Young boys were playing and jumping over a makeshift fire. (We did not encourage the activity, merely captured it.) My trip was part of a Giving Lens travel photography workshop.

Member for at least 25 years

About this photo: This was taken while on a private trip, with Apex Expeditions, celebrating my 80th birthday. While traveling through the savanna, we could not believe our eyes when a low-lying gathering was taking place. By George, is this where the mud spa originated? A few water buffalo and one lone hippo? If he hadn’t raised his head to disclose the eye, he would have blended into the mud pool!

Member for at least 12 years About this photo: While we were visiting Kunming Stone Forest, we were entertained by a group of local Yi people enjoying their weekly music and dance get-together among the limestone cliffs. I captured this traditionally attired youngster taking a break from the festivities to use her very modern cell phone.

Location: On a hike in the Alpe di Siusi region of the Dolomites in northern Italy

About this photo: We were hiking near the fabulous Adler Mountain Lodge, where we were staying. We had just arrived after flying into Venice and driving to the Dolomites, and we were eager to get out into the mountains. It was late afternoon, and storm clouds were gathering. The light was beautiful, as it can be at that time of day. We hiked up a ridge and then turned to look back across the alpine valley. This was what we saw, and we shall never forget how dramatic and breathtaking it was. About this photo: The image is of a pride of six lions attacking a Cape buffalo. The struggle went on for 10 minutes; if the lions had been able to force the buffalo to the ground then the fight would have ended with a feast for the pride. Fortunately for the buffalo, several of his buddies came trotting to the rescue and forced the lions away. The photographer was my son, Chris Kelly.

Members for at least 11 years 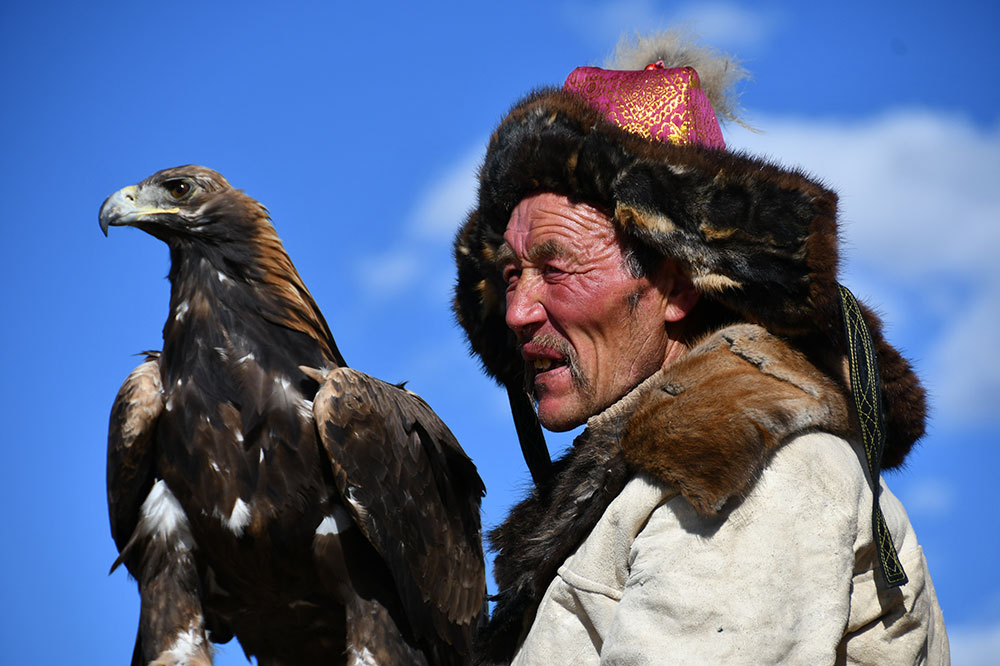 About this photo: The photo is of a Kazakh eagle hunter who hunts along with his prized eagle, taken on an eagle festival tour with Kazakh Tour, arranged and co-led by Wild Earth Journeys. We slept in gers (yurts) set up by local families and trekked by horse between camping locations, visiting Kazakh nomads. Then we went on an eagle-hunting expedition with five local eagle hunters before attending the Sagsai Eagle Festival.